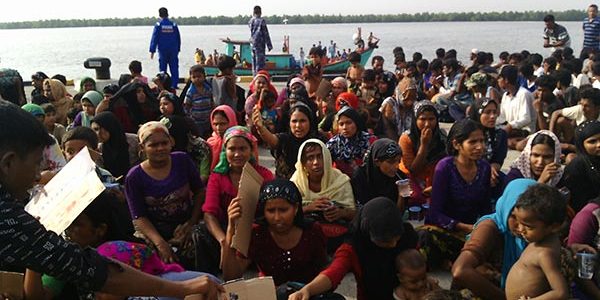 Indonesia Civil Society Coalition for Asylum Seekers and Refugees appreciate the local government of Nagroe Aceh Darussalam in facilitating Rohingya refugees who have landed in the province. According to the Coalition, the Aceh government has shown the best example of a government’s response to the stateless people by opening their gates, letting the refugees disembark and providing them with sufficient humanitarian assistance.

‘We appreciate the local traditional fisherman of Aceh and the government of Aceh, also the people of Aceh who have helped the refugees and are providing them with humanitarian assistance,’ said Rama Adi Wibowo of Dompet Dhuafa.

The Coalition also highlights the absence of Indonesian law in handling refugee and asylum seeker cases. ‘We urge the Indonesian government to immediately enact the Presidential Decree on Handling Refugees and Asylum Seekers. Do not let this absence of law continue!’ said Yunita, Public Interest Lawyer of LBH Jakarta.

‘Even though Indonesia is not a signatory to the 1951 UN refugee convention, it should take into account the principle of non-refoulment, as refugees still stranded on boats may be victims of persecution,’ said Yunita.

The coalition also urges all governments in the ASEAN region, including the Indonesian government, to immediately rescue and facilitate aid relief to those still on boats, as the first and immediate priority is to save lives. ‘The longer these women, men and children remain at sea, the more at risk they are of dying. Search and rescue boats in the Andaman Sea and the Straits of Malacca must be utilised to prevent further suffering and loss of lives,’ added Tatak Ujiyati, Advocacy Director of Save the Children.

‘ We are all very concerned by the situation of migrants stranded at sea and by reports that some of the boats have been pushed away from the coasts of Thailand, Malaysia and Indonesia. It is reported that there are many children on these boats,’ said Tatak.

The Coalition demands Jokowi’s administration enact the Presidential Decree on Handling Refugees and Asylum Seekers in accordance with international human rights principles. ‘We urge the government to adopt the permanent protocol on handling refugees and asylum seekers that has been in development for so long, to avoid this situation happening again,’ said Muhammad Hafiz, co-Chair of SUAKA.

We also should bear in mind that Jokowi administration has its own ‘Nawacita’ or ‘Nine Priority Agenda’, the ninth priority being that the state should promote human rights and humanity in any national or state matters. ENDS