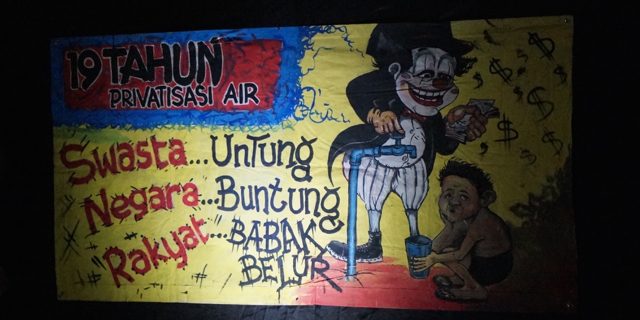 On August 17, 2020, Indonesia celebrated the 75th anniversary of the Independence of the Republic of Indonesia. We believe Mr. Anies Baswedan, Governor of Jakarta is aware that one of the core objectives of the struggle for independence is to create social justice for all Indonesians.

We have strong basis for this as stated in Article 33 paragraph (3) of the Constitution: “The land and water and natural resources contained therein are controlled by the state and used for the greatest prosperity of the people. Water is one of the elements of agrarianism as well as a production branch that must be controlled by the State because of its important nature and is aimed at the livelihood of the people.”

The above was confirmed by the Constitutional Court through Decision Number: 85 / PUU-XI / 2013 which stated that “The right to water is part of human rights, so the State must respect (to respect), protect (to protect) and fulfill (to fulfill), and it is not only related to present needs but also must be guaranteed its continuity for the future because it involves human existence ”.

Since 1997 Jakarta water management has been handed over to private for-profit companies, namely PT PAM Lyonnaise Jaya (Palyja) and PT Aetra Air Jakarta (Aetra) [both of which have recently been bought by the Salim Group].  The Financial and Development Supervisory Agency released the “2016 PAM Jaya Performance Evaluation Report” published in June 2017, which shows that the state suffered a cumulative loss of Rp. 1.266 trillion and negative equity of Rp. 945 billion since the collaboration in 1997 with the two private companies. PAM Jaya also has an obligation to Palyja of Rp. 266 billion and Rp. 173 billion to Aetra (Mongabay, April 2018).

In addition, throughout 2013, PD PAM JAYA received 53,114 complaints from customers regarding water services. Most complaints regarding no water (JPNN, December 2013), as well as Jakarta’s very high water tariff, which is Rp. 7,800 per cubic meter (the highest in Indonesia). This condition further excludes the people of Jakarta from fulfilling their right to water.

Mr. Anies Baswedan certainly remembers the campaign promise (2017) that he will “Expand the coverage and improve the quality of clean water services with priority for areas with the worst water quality, and provide direct subsidies for poor people”, then on 12 February 2019 he also promised to “…take over the management of drinking water from Palyja and Aetra.”

It should be noted that expanding the coverage and reach of water services with the private sector has failed.  This is evidenced by fact that expansion of water coverage has only increased by 10% since the cooperation agreement with Palyja and Aetra from 1998 to 2017, close to 20 years! This adds to the series of financial losses suffered by the state as stated in the 2017 BPK report.

We are now 28 months prior to the end of the Cooperation Agreement which underlies water privatization in Jakarta. Through this open letter we urge Mr. Anies Baswedan as the Governor of DKI Jakarta to: