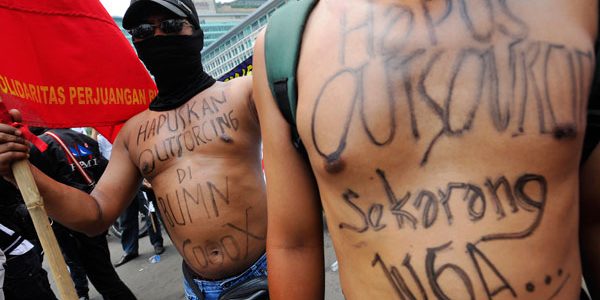 Minimum wage increased in 2013 in the province of Jakarta and its surroundings is quite significant, exceeding the 40 % rate hike. Regional Head decision to raise the minimum wage to be addressed by a number of companies to apply suspension of the minimum wage, but the request was tricky regarding eligibility of suspension. Efforts to propose the suspension of the company, countered by LBH Jakarta with Trade Unions as members of the Indonesian Workers’ Assembly ( MPBI ); FBLP; and SPN, was by creating Advocacy Team for a decent wage ( TABUL ). The effort was in order to sue full suspension of wage tricky through administrative courts by sue 3 (three) the governors, i.e. Governor of West Java, Banten Governor, and Governor of DKI Jakarta Governor. They were asked to annul the decision of the Suspension Agreement Implementation of Minimum Wage in 2013. The lawsuit were filed by the workers through legal counsel in TABUL where two lawsuits filed by the union in the province of West Java and Jakarta granted and filed a lawsuit could not be accepted by the Administrative Court in Banten Province.