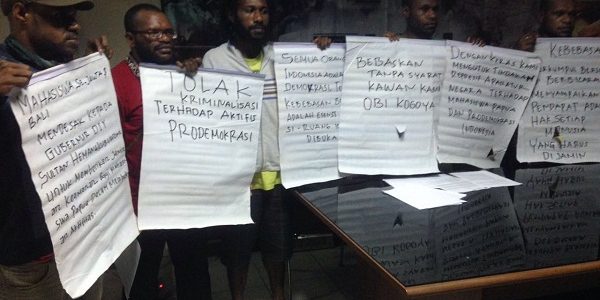 LBH Jakarta Thoroughly Condemn The Brutal And Anti Democracy Act That Have Been Done By Apparatus Of Kepolisian R.I. In A Papuan College Student Dormitory At Yogyakarta – 15 July 2016.

Yogyakarta – Friday, 15 July 2016, Persatuan Rakyat untuk Pembebasan Papua Barat (PRPPB) has planned to do a long march starting from Asrama Mahasiswa Papua Kamasan I located at Jl. Kusumanegara (Papuan student dormitory) to zero kilometer point, begining from 09:00 AM – until finished. Long march was an act to declare the support to the ULMWP to be a full member of MSG, and to fight for the right to self determination as a democratic solution for West Papua. Nevertheless, this peaceful action was being threatened and repressed by the apparatus of Kepolisian R.I. and vigilantes.

Indonesia is clearly not a country of authority and power, but a country of law that upholds the values of democracy and human rights, these has been guaranteed and stipulated under the Constitution and also under National Law No. 9 year regarding Freedom of Public Opinion, which stipulates that anyone deserves the right to public opinion, that being said, including civil society and Papuan students. The act conducted by the apparatus of Kepolisian Daerah Istimewa Yogyakarta under the command of Kapolda Brigjen Pol. Prasta Wahyu Hidayat to surround Papuan student dormitory at Yogyakarta to prevent the long march, in accordance with brutal actions such as spraying tear gas inside the dormitory, confiscating motorcycles, arbitrarily detaining people, doing an act of coercion and violence as evidence of the brutality which can be categorized as demolishing Rule of Law and democracy in Indonesia.

The vigilantes around the scene also took a part in conducting coercion act and violence, but unfortunately was allowed by the police by being idle. The idleness of the Police force is clearly a form of powerlessness of the apparatures to do law eforcement regarding to the National penal code. Hate speeches, racism and intimidating acts in addition to the usage of weapons to civil society and Papuan students are the problems that should be addressed and processed under the National law, but the Police force continues to let the things aforementioned being done and consequently attacking and doing unlawful acts against Papuan students in their dormitory at Yogyakarta. The police did not uphold their duties to protect the victim of this incident, instead, they legitimate the acts of the vigilantes and worsened it by doing arbitrary acts. Such actions conducted by the Police force are very destructive and will demolish the foundation of Indonesia as a State in maintaining Rule of Law and establishing a democratic system in respect of human rights.

Accordingly, LBH Jakarta as a part of Gema Demokrasi (GEDOR) in conjuction with all elements of GEDOR, proclaim that:
1. President as Head of State and Government must order National Police and TNI to stop doing repressive acts to civil society, Papuan students and pro-democracy groups in Indonesia;

2. Govenrment and law enforcements officers have to open democratic space to the maximum extent for Papuan students and society;

3. Government and law enforcement officers have to guarantee the freedom of assembly, freedom of association, freedom of expression and freedom to public opinion which are every persons’ rights without ay exceptions.

4. Governor Daerah Istimewa Yogyakarta has to guarantee the safety and security for Papuan students in doing their activities, including in respecting, protecting and fulfilling their human rights;

5. Kapolda Daerah Istimewa Yogyakarta has to make an affirmative action to the Police force who conducted coercion, violent and arbitrary acts;

6. Kapolda Daerah Istimewa Yogyakarta to disperse the apparatus and vigilantes from the Papuan dormitory (Asrama Papua Kamasan I) at Yogyakarta and other places of which the acts were conducted, including dispersing 7 Police trucks behind the dormitory and erasing the mandatory report status from citizens and Papuan students that have been freed from detention;

Thus, this statement was made into force, we deeply thank the concern given by the journalists who have helped us in making this statement.