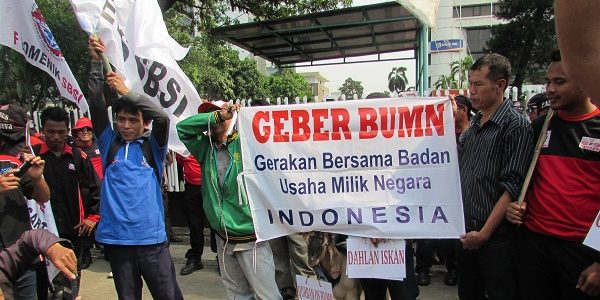 Jakarta, Jakarta Legal Aid Institute – The Joint Movement of State-Owned Corporations’ Workers (Geber BUMN) has for the umpteenth time, held a mass demonstration. The protest took place in front of the State Ministry of State-Owned Enterprises’ Building at South Medan Merdeka Street Jakarta (07/10/14). The event that held the theme of “Claiming the Country’s Sacrifice for Outsource Workers at State-Owned Enterprises” was participated by hundreds of mass coming from various Workers’ Union.

The demonstration was symbolized as a form of fortitude of battle for Geber BUMN that was inspired by the qurban/sacrifice. Additionally, concomitant with the momentum set by this Raya Idul Adha, Geber BUMN encourages the sincerity of sharing which aspires to ward off discriminative treatments among fellow citizens.

Furthermore in this demonstration, Geber BUMN brought along a goat which was then slaughtered right in front of the State Ministry of State-Owned Enterprises’ Building. Afterwards the goat head was presented to the State Minister of State-Owned Enterprises by Geber BUMN which was received symbolically a representative of the Ministry’s security staff.

The protest proceeded peacefully and was safely controlled. In this protest, the crowd demanded for the fulfillment of their rights. The crowds who were outsource workers have been victimized by the viciousness of the ‘red-plated-enterprises’. In fact, there have not been only a few cases where thousands of workers lost their jobs by unilateral terminations. Their normative rights were disregarded; their rights to argue and to associate were also appropriated. Heretofore the State Ministry of State-Owned Enterprises is still deemed as unable to run its function to fulfill and to protect the rights of outsource workers.

The results of recommendation by the Standing Committee for the State-Owned Enterprises’ Outsourcing of the House of Representatives of Republic of Indonesia (Panja Outsourcing BUMN DPR RI), Agreement of the Hearing Working Meeting of the House of Representatives of Republic of Indonesia (RAKER RDP DPR RI), employment supervision inspection memorandums, The Decision of Constitutional Court dan other related courts have all remained unexecuted. In addition the latest development regarding Legal Opinion (LO) has until this day sees no light towards its realization as a settlement (appointment) policy for Stated-Owned Enterprises that has received LOs from Young Civil Administrative State Attorney (JAMDATUN) to be brought about as a actual decision.