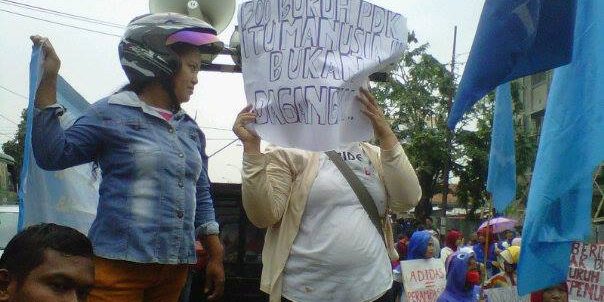 A variety of legislation in Indonesia are set to a number of provisions for the protection of workers. Even some of the acts that constitute infringement threaten with criminal sanctions for violators. These rules include the Law No. 13 of 2003 on Labor, Law No.. 3 of 1992 on Social Security, Law no. 21 Year 2000 on Workers Union / Labor Law No.. 2 of 2004 on Industrial Relations Dispute Settlement (PPHI), Law No. 1 1970 on Occupational Safety and Law No. 7 of 1981 on the Company’s Report Obligatory in the number 46 (forty-six) chapters to a penalty.

Although there have been 46 (forty six) chapters to a penalty, since 2003 only one case in which the employer was liable for violating the rights of workers, i.e. in the case of PT. King Jim in Pasuruan, East Java. A number of other labor criminal cases were not followed up by the police even though the stage was a crucial stage for the next process in the criminal justice system.

LBH Jakarta received 26 (twenty-six) labor criminal cases during the year 2012-2013. From these reports, there iss no cases that progressed to trial, it means that there was no employer really tried for violating workers’ rights let alone imposed criminal sanctions. Uneffectively enforcement by police investigators understanding caused by the labor law so that workers’ rights violations resolved by way of mediation or diverted to the proposed mechanism.

Therefore, it was important to set up Desk/ Labour Unit in the Criminal Division of the National Police. With the existence of this unit, there was expected to special education for the police regarding criminal labor and to the front there was the police who are the focus of a criminal case in a professional labor. If the labor law enforcement running the company, violated labor rights deterrent.