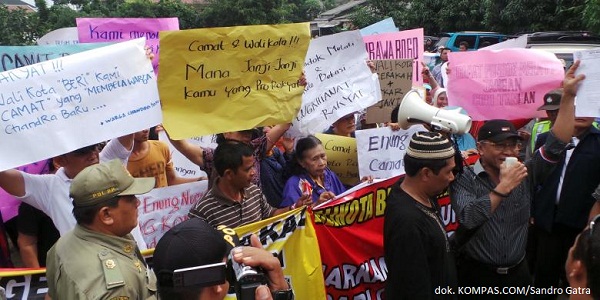 Thousands of local people have protested against plans to construct a Green Lotus housing complex on the water catchment area of Situ Rawa Bogo in Jati Asih, Bekasi, West Java.

The Green Lotus complex, which is set to be built by developer PT Sukses SERC Jaya Pratama, will contain 81 houses on 14,931 square meters of land.

One of the protesters, Teddy Susanto, said he was opposed to the development as Situ Rawa Bogo was the only water catchment area for nine nearby housing complexes, including Chandra Baru, Griya TMII, Duta Indah, Intan Lestari, Sanctuary, Cahaya Kemang Permai, Dosen IKIP and Antelope Maju complexes.

He said residents from the nine complexes had formed the Alliance of Communities for Environmental Care (Ampulih) to fight the plan.

Teddy, who is also Ampulih’s coordinator, said the nine complexes were home to 19,460 people.

“The developer wants to sacrifice the 19,460 residents for 81 homes. Can you believe that?” Teddy told The Jakarta Post on Tuesday.

He said that Sukses SERC Jaya Pratama had begun to dredge the catchment area in 2012 to build the foundations for the Green Lotus complex.

Teddy, who lives in the Chandra Baru complex, said that prior 2012, the nine housing complexes were inundated only once every five years.

“Since the developer began dredging Situ Rawa Bogo, our housing complexes are now inundated almost every month because the water catchment area doesn’t function as well as it used to,” he said.

Teddy said that before the developer bought the land, its former owner promised to sell it to the Bekasi administration to be preserved as a water catchment area.

Current Bekasi Mayor Rachmat Effendi had also, according to Teddy, promised while campaigning in 2011 to purchase and preserve Situ Rawa Bogo if he was reelected.

“We all voted for him, hoping that the city administration would maintain Situ Rawa Bogo’s function as a water catchment area. But when he was reelected mayor, it seems he forgot his promise. Now the land is owned by a developer and will soon be turned into a housing complex,” Teddy said.

He added that the residents, concerned about the future of the surrounding environment, formed Ampulih and had conducted monthly protests in Situ Rawa Bogo.

He said they had also consulted the Jakarta Legal Aid Institute (LBH), which was now representing the 19,460 residents.

Meanwhile, LBH Jakarta lawyer Rachmawati Putri said that Sukses SERC Jaya Pratama did not have a permit to develop the housing
complex.

“The developer does not have a permit from the Environment Ministry. If they go ahead with the development, they will be breaking the law,” Rachmawati told the Post.

She added that the Environment Ministry had also sent a letter calling on the developer to halt its construction.

Moreover, she went on, LBH Jakarta, on behalf of the residents, had sent an instruction to Sukses SERC Jaya Pratama to stop the construction; if it failed to do so, the institute would report the developer to the Bekasi Police.

Teddy said the developer was still dredging as of Monday evening.

“We will file a report with the Bekasi Police against Sukses SERC Jaya Pratama because it is breaking the law,” he said.

Teddy added that the construction site was often guarded by dozens of hired thugs.

Neither Mayor Rachmat nor a spokesman for the developer could be reached for comment on
Tuesday. (The Jakarta Post)