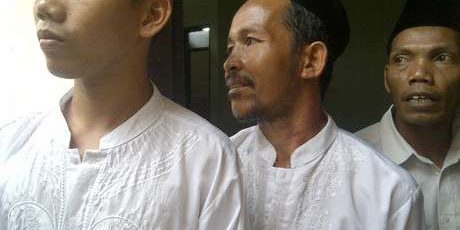 INDONESIA: The Supreme Court of Indonesia should declare the cassation of the three traditional fishermen as inadmissible

The facts of this case have come to the notice of the AHRC, following public discussions and reports detailing the criminal prosecution of these three fishermen in Indonesia, a country known for its maritime prosperity. And, these facts have given the AHRC cause for concern.

Damo, Rahmat, and Misdan are small-time traditional fishermen from Ujung Kulon, West Java Province, who were arrested by officers of Ujung Kulon National Park (UKNP) on Friday, 3 October 2014. It has been alleged that they were fishing for crabs and shrimps in an area the officers have claimed is UKNP territory; they allegedly attempted to steal 4 lobsters and 24 crabs from the territory.

Firstly, a study of the case has led AHRC to the opinion that the criminal prosecution is premature. The administrator of UKNP, i.e. the government, did not establish exact boundary markers, a failure that can easily result in persons entering territory of the National Park unintentionally.

The trial hearings brought out how there were no visible or identifiable boundaries marking the conservation area. A UKNP officer argued that the boundaries are marked in the GPS (global positioning system); however, not all the traditional fishermen have access to, or use, GPS.

Secondly, the non-existence of physical boundaries has heightened the risk of criminal prosecution against other local community members and fishermen who live around the national park and depend on natural resources in the area for survival. Such traditional fishermen, not GPS savvy, might unintentionally enter the park territory and suffer the misfortune of Damo, Rahmat and Misdan.

Article 33 paragraph (3) of the Law No. 5 Year 1990 on Biological Natural Resources and its Ecosystem Conservation provides that:

“Every person is prohibited to conduct activities not in accordance to the function of utilization zone and other zones of national parks, forest parks and natural tourism parks.”

This article was enforced in an attempt to imprison the three fishermen. While the AHRC fully supportsthe protection and conservation of natural resources, to enforce this Article of the Indonesian conservation law, without establishing clear physical boundaries to demarcate the territory of the national park, would only amount to criminalizing innocent local fishermen who might happen to drift into the conservation area for their livelihood and sustenance. A lack of set boundaries makes the application of the law arbitrary, and this affects not just the three fishermen but also all the communities living in proximity to the park.

Thirdly, the Constitution of Republic of Indonesia (UUD 1945) regulates that the utmost objective of the establishment of Indonesia is for the welfare of the people. Furthermore, Indonesia has ratified the International Covenant on the Economic, Social and Cultural Rights (ICESCR), with the promulgation of Law No. 11 of 2005, and therefore has the responsibility to uphold the economic rights of its people.

It is a known fact that the communities living around the national park depend on fishing around the UKNP for their sustenance. However, rather than work with these communities to fulfill the conservation needs on one hand and ensure that their rights to work and adequate standard of living are upheld on the other, the government is seeking to limit their access to resources and to criminally prosecute them.

Fourthly, thethree defendants have suffered violations of their rights, from apprehension to acquittal. They should be availing remedy for the injustice suffered, not cassation. The Pandeglang District Court, West Java Province, found the defendants not guilty; the Court was convinced they did not commit the alleged crime. This implies that the three defendants did not “willfully” violate the law (mensrea), a basic requirement to implicate a person in a crime. An acquittal sentence should not be an object of cassation. Facing cassation after being acquitted violatesthe human rights of the defendants and it will result in ambiguity of law and injustice, as also stipulated in Article 244 of the Criminal Procedure Code.

The first and appeal trial hearings brought out some aspects mentioned in this letter: the lack of physical demarcation, the lack of a consultative approach to conservation boundaries, the lack of information dissemination about the boundaries, and even the fact that the defendants may have unknowingly entered UKNP territory to save themselves from high waves that threatened their lives. The AHRC is also aware that the men are breadwinners for their families, and remain detained at Pandeglang State Detention Center. Furthermore, Damo’s wife happens to be pregnant and Misdan married just three months ago.

All the above facts have brought the AHRCto the opinion that the continuance of criminal prosecution against the three traditional fishermen of Ujung Kulon is misplaced at best. The AHRCbelieves that the Supreme Court of Indonesia should declare the cassation as inadmissible.

The AHRC hopes that bringing these facts to the Honorable Panel of Judges who will examine the case will assist in justice being served.

Thank you for your consideration. We look forward to hearing back from you.